Announcement on Illicit Printing of Banknotes

1. The Ministry of Planning, Finance, and Investment has received credible information that the illegitimate military council has made approaches to foreign banknote and security printing firms in order to seek assistance in printing new Myanmar kyat banknotes.

2. Issuance of currency is the sole prerogative of a nation’s government. The National Unity Government has determined the illegitimate military council to be an unlawful association under Section 16 of the Unlawful Associations Act 1908. It shall remain so irrespective of its change of title, composition, or dissolution under Section 18 of the said Act. As such, any issuance of currency effected by the military council, its successor entities, and any of its subordinate or subsidiary associations, including the so-called ‘caretaker government’, shall be deemed to lack legitimacy.

3. Causing inflation by printing excess banknotes is, in effect, the theft of our people’s labour and savings. As our nation faces unprecedented perils of conflict, poverty, and pestilence, all precipitated by the military council, such a reckless and irresponsible act that will cause harm to labourers, workers, households, businesses, and investors shall not be tolerated.

4. The National Unity Government calls upon the military council to desist from this act of economic sabotage. Likewise, the National Unity Government implores foreign banknote and security printing firms who have been approached, and those who may yet be approached by the illegal military council, to refrain from the printing of Myanmar kyat banknotes and from providing any raw materials, supplies, or system components that could be used in their production.

5. The National Unity Government calls upon all responsible firms to follow the example set by Giesecke+Devrient GmbH in March when it took an immediate, principled, and ethical step in halting all deliveries to the military council-controlled printer, Security Printing Works.

6. The National Unity Government shall consider any assistance provided to the illegal military council to print illicit banknotes as an act of aiding and abetting an unlawful association responsible for numerous and ongoing atrocities, including crimes against humanity and genocide. 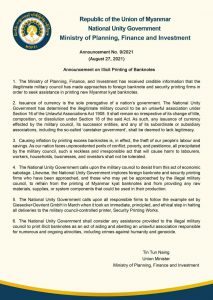